The 115l Slalom Board Decision


A while ago Lars from Norway contacted me for advice on buying a new slalom board.  He feels that his medium sized iSonic is just a bit too wide for the type of chop they experience at his sailing spot.  The wide bottom gets bashed about.

Lars feels that he needs a slightly narrower board and has decided on a new 115(ish)/71(ish) board.  This he will use in what to them is stronger wind.  For lighter winds he has a wide iSonic which gives him all the support and flotation he could possibly need.
.
During the discussions Lars forwarded a nice review page from a windsurfing publication. 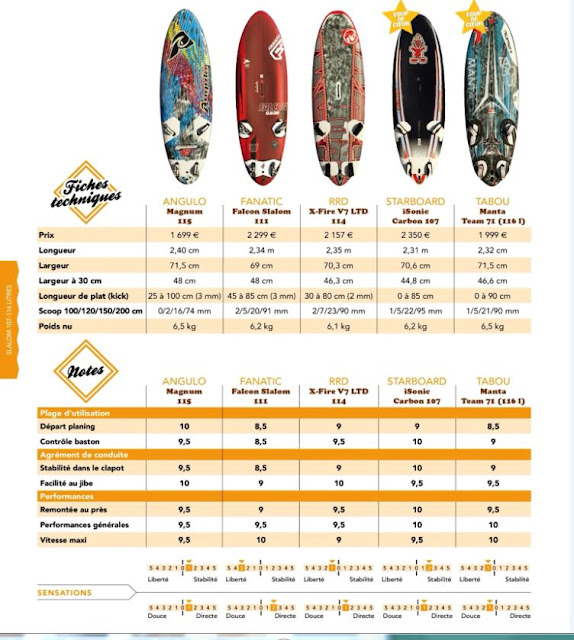 As you can see the results are presented quite nicely on one page and their test covers most of the usual suspects.  A nice chart for all of us I think.

What we both regretted is the absence of a Patrik model in the line-up.
Anyway, what to recommend.  Lars weighs between 90 and 100kgs and is not a pure racing sailor (like 95% of us I suspect).


As you can see from the chart, all these boards are excellent and I believe that while they may differ slightly, none will be clearly better than the rest for winning races.

In the case of a non-racer, I always try to focus on comfort, early planing and ease of gybing.  I also favor a slightly longer board because this makes it less technical to get planing and also makes the board nicer to bob back on if the wind drops.  I acknowledge that pure racers may look for a totally different set of attributes.

I know that Patrik boards are comfortable and gybe well so our short list ended up being Patrik’s 115 (2) and the Angulo Magnum 115.  The Patrik is slightly narrower and shorter.
I am biased towards the Angulo mainly because I have always wanted to own one myself but also because Ed Angulo is one of the old time windsurfing designers who can put magic into a design.  My choice in this situation would be the Magnum.

I await the decision of Lars and the results he gets on the water. 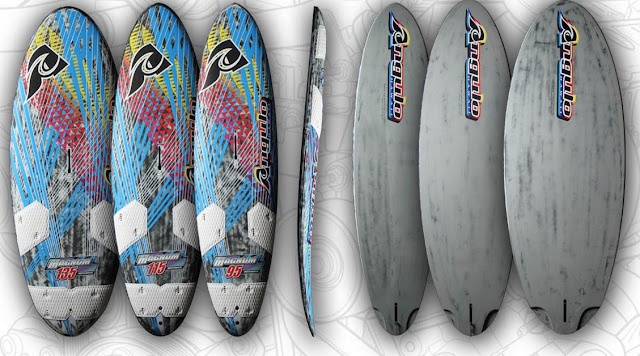 Speaking of old designers who know how to put magic into their designs - here are four:  Ed Angulo, Mike Zajicek, (late)Harold Iggy and Gunter Lorch.  These guys all learnt things in the days of long narrow boards - special things which seem absent from many modern designs.  Riding on a good piece of equipment from one of these guys means being first on the water with a shiver of anticipation.  It means being the last off the water feeling deep peace and joy.  Modern equipment with its razor sharp performance can enable you to win the race but often seems (to me anyhow) to have lost a bit of soul to get there.

This is all part of my current rebellion against equipment which punishes us:
Anyway, on the subject of easy equipment I will do something on Robbie Benz's Zulu fins in the next post.  As discussed in an earlier post, these fins are very special because they produce high performance together with supreme comfort (much like some of the boards from the old masters listed above)

Talk to you soon